Retarget a UE5 Animation to a Mixamo Character

Retargeting a UE5 Animation to a Mixamo Character is very simple, and uses the standard UE5 workflow. You can read more about the UE5 retargeting system here: https://docs.unrealengine.com/en-US/ik-rig-animation-retargeting-in-unreal-engine/.

Thanks to the Root bone that the plugin adds to the processed Mixamo characters, you can also retarget Root Motion animations.

Direct support for the MetaHuman skeleton (used also by the Manny and Quinn mannequins in UE5) is under active development and will be added in a future update. In the mean time, you can continue using the plugin to retarget MetaHuman animations to Mixamo characters following specific instructions.

This video tutorial shows, after having applied the plugin, how to retarget a UE5 animation (based on the UE4 Mannequin skeleton) to a Mixamo character.

How to - step by step

To retarget an Unreal Engine 5 animation based on the UE4 Mannequin skeleton to a Mixamo character (including Root Motion animations):

The plugin computes ad-hoc retarget poses for all the Skeletal Meshes using the target skeleton. This allows the Retargeting System of Unreal Engine to generate better results when properly configured.

If the target Mixamo skeleton is used by several Skeletal Meshes, you can select a compatible target asset in the Target Preview Mesh property of the IK Retargeter editor (selecting a skeletal mesh not using the same skeleton is not directly supported by the plugin). 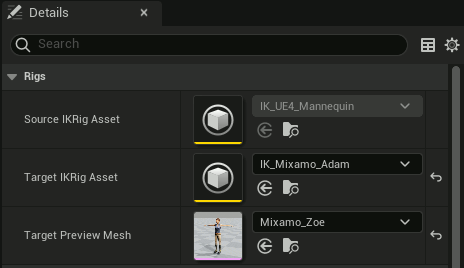 Ensure to select the corresponding Retarget Pose before exporting the animations.

This allows the Retargeting System of Unreal Engine to compute a retargeted animation better suited for the selected skeletal mesh.